ENJOY FREE SHIPPING ON ALL ORDERS OVER AU$74 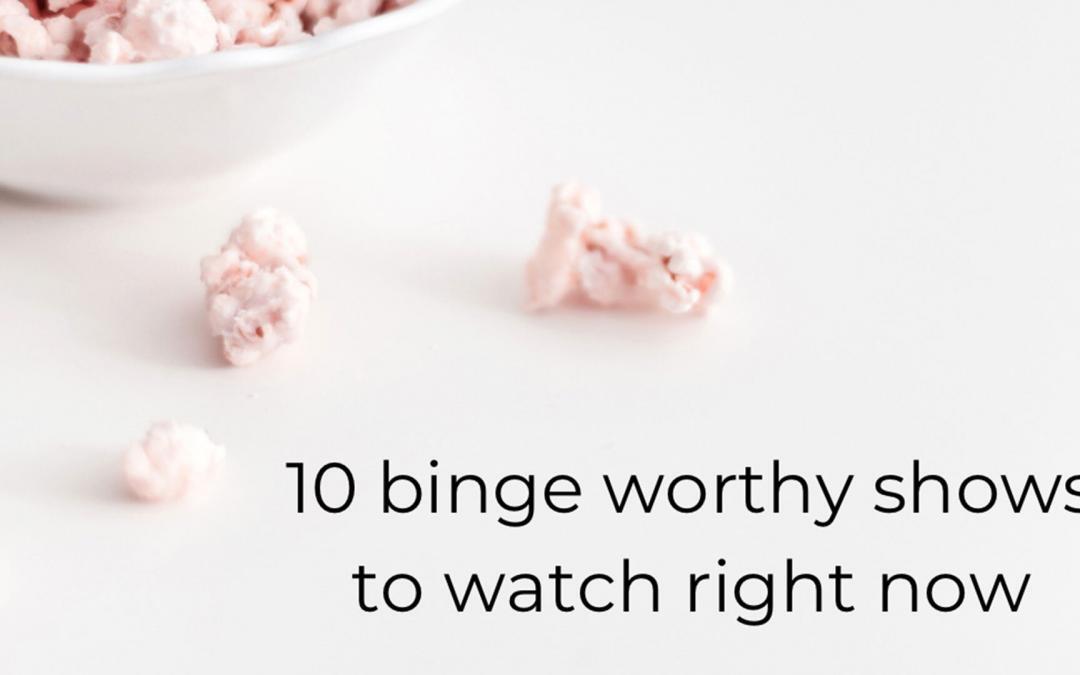 I don’t know about you, but I love a good binge worthy tv show.

I have a bit of a routine that I do before I settle in for a solid afternoon on the couch and it goes a little something like this:

OK, so now that we’ve got our routine sorted let’s get into the shows to watch.

1. Mrs America – Set in the 70s, Mrs America tells the story of the feminist fight for the US to ratify the Equal Rights Amendment. Brilliant casting and a fascinating insight of conservative campaigner Phyllis Schlafly’s rise to prominence while also highlighting some of the great feminist leaders of the time.

2. The Undoing – Featuring Nicole Kidman and Hugh Grant, The Undoing is a tv thriller, jam packed with twists and turns you didn’t see coming.

3. Yellowstone – If incredible scenery, cowboys and a dramatic storyling are your thing, Yellowstone is the show for you. Set on a ranch in Montanta, Yellowstone follows the ups and downs of the Dutton family, with John Dutton (Kevin Costner) running things.

5. Will And Grace – Relive the iconic original series with the Will and Grace rebot. Picking up where the show left off 10 years ago, the last remaining episodes are equal parts hilarious and nostaligic. With the original cast members onboard and former cameos cleverly weaved into each new episode, you’ll be hooked quicker than you can say, “Just Jack!”

6. The Queen’s Gambit – Based on a 1983 novel of the same name, the series follows the story of Beth Harmon, who starts her life at an orphanage, where she is fed tranquillisers and soon builds an addiction to the drugs, but also unlocks a hidden talent while learning to play chess.  It’s brilliant viewing from start to finish.

7. A Very English Scandal – Based on true events, this three part series tells the story of secrets and lies that rattle Britain when Liberal Party leader Jeremy Thorpe stands trial for conspiring to murder his former lover. Easy to watch and an entralling story.

8. The Last Dance – I’m not a sporty person, but I loved watching this docuseries. Following the rise of Michael Jordan and the 1990s Chicago Bulls, with unaired footage from an unforgettable 1997-98 season, it’s inspiring, motivation and interesting to watch.

9. The People v O.J Simpson – This dramatization traces the twists and turns of O.J. Simpson’s murder trial, examining behind-the-scenes gambits on both sides of the court. This series has been around for a while, but it’s brilliant viewing, particularly if you can remember watching the verdict back in the 90’s.

10. The Crown – Possibly my favourite series of all time (big call, I know), The Crown follows the political rivalries and romance of Queen Elizabeth II’s reign and the events that shaped the second half of the 20th century. Season 4 kicks off on November 15th and just quietly, I can’t wait.

Do you have a binge worthy show to recommend? I’d love to know what it is!

For more self care tips and general uplifting chat, join us on instagram.

This site uses Akismet to reduce spam. Learn how your comment data is processed.

What began as a face oil created by husband and wife team Kirsten and Scott Smith to help with Kirsten’s own skin concerns is now bettyquette® A luxe range of honest, natural skincare products which help thousands throughout Australia and New Zealand with their own skin care needs.

ENJOY FREE SHIPPING ON ALL ORDERS OVER AU$74!